The Toward Zero Deaths approach is based on the belief that even one traffic-related death on our roads is unacceptable.

This "zero deaths" idea was first adopted in Sweden in 1997 as "Vision Zero" and since then has evolved to several state DOTs, including Minnesota, that have identified zero deaths as a core objective in their Strategic Highway Safety Plans.

TZD uses a data-driven, interdisciplinary approach that targets areas for improvement and employs proven countermeasures, integrating application of education, enforcement, engineering, and emergency medical and trauma services (the "4 Es"). A combination of strategies from different focus areas is often most effective for solving a particular problem.

In 2001, the North Star Workshop brought together experts from many Minnesota research organizations and state agencies—as well as presenters from Washington, Sweden, and Australia—to share information. The Toward Zero Deaths program developed out of the momentum created by the North Star workshop. 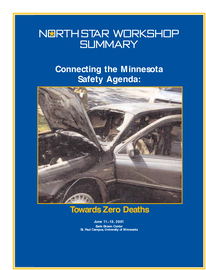 Moving toward a goal of zero deaths requires cooperation among state agencies as well as a way to build connections between state agencies and local organizations. The statewide TZD program was launched in 2003 by the Minnesota Departments of Public Safety, Transportation, and Health as a deliberate, interdisciplinary approach to traffic safety.